Are You a Frankie or a Grace? A Signature Style Can Speak a Lot About Your Personality

The stay-at-home order and social unrest has made all of us a little wacky… and turned a lot of us slightly feral. (I took a scissors to my own hair this past week… that’s why you won’t see any current photos of me!)

One important escape for a lot of us has been video entertainment. And one of the more fun – and genuine – programs that expresses the trials and tribulations of those of us over 50, 60, and 70, is the Lily Tomlin and Jane Fonda series, Frankie and Grace. Enjoy it soon as this will be its last season, sadly.

The reason a lot of older women identify with these characters is that they are true to who they are as individuals, but they have forged a deep friendship based on their mutual pain.

One is extremely classic and traditional in her personality and the other is very bohemian. That teaches us something profoundly important: When we show up fully as ourselves, we allow others to be true to themselves as well.

For the purpose of this article, we’re going to examine Frankie and Grace’s wardrobes. When a TV or movie wardrobe assistant chooses fashions for a character, she has to understand what makes that character “tick.”

That informs every aspect of how a character expresses herself in the world, which includes how she chooses to dress.

Their Names Say It All

Let’s just start with their names. Grace: what are our immediate associations with that word? Well, the dictionary definitions are elegance, finesse, charm, poise. That describes a refined personality.

Jane Fonda’s character, Grace, reflects what we would call a Classic fashion style. So, we expect to see her in refined, simple, classic, well-made, traditional clothing. It’s a little buttoned-down, but that’s who she is.

Then there is Frankie. Frank: open, honest, direct, forthright, and candid. So, we would expect this character, Lily’s Tomlin’s, to be no-nonsense, comfortable in her own skin, a bit flamboyant, but without pretentions.

That would define someone who has a lot of the Natural style essence. And because her name is a masculine play on Frances that would suggest that some part of her is counter-culture.

Are You a Grace Type?

A more Classic style wardrobe could make almost any of us feel pulled together. We’ve mostly left behind shorter skirts, shiny fabrics, and revealing clothing in general. And having some really well-made, versatile classic pieces is such a simple way to dress for many occasions.

That’s especially true if we can’t be overly bothered to care about what we wear anymore. Throw on a nice blazer, a pair of trousers, a pretty blouse, and you’re pretty much good to go anywhere.

Now, Grace’s version of this wardrobe is a little bit more playful and feminine than a strictly classic wardrobe, which in many ways is based on menswear.

That means in addition to suits and suit pieces, you’ll also see her in shirtwaist dresses (with designer belts and bags) plain, floral, and striped blouses, and her blazers will be in multiple colors, not just neutrals.

Grace’s shoes are usually simple pumps or flats. Her jewelry is luxe, simple, appropriate to her style, and not showy.

But she does love her sweaters. Still, they have some structure, like her simple cardigans. And even the bulkier ones have a lot of style and elegance. You’ll see Grace wearing those in her neutrals, usually a shade of tan.

As for her other colors, Grace wears what her performer, Jane Fonda, looks best in. Those are the colors that we call the Lively Bright – or spring – palette. These are mostly upbeat shades – bright but not overly intense. They have, well, a quality of lightness and playfulness to them.

This is a perennial wardrobe that will look chic and appropriate to her personality and style for the rest of her life.

Or Maybe You Are a Frankie Type?

Frankie is the polar opposite in style from Classic. There is nothing “buttoned down” about her style.

Frankie is a born bohemian, meaning, her clothing will match the level of Drama and Natural style we associate with the boho look. Her colors and textures speak of ethnic elements, boldness, color, and pattern mixing, all done with an artistic flair.

Frankie (like Lily Tomlin, who began her career as a comedienne) has a more expressive face. It is a bit more dramatic, but not in an imposing way.

Her look is as carefully thought-out as Grace’s, but it is based on the creative expression that reflects every part of how she lives and sees herself in the world. She is a grown-up hippie with more money to spend on her wardrobe than when she was in her 20s.

You’re not going to see Frankie in anything very Classic. Her favored pieces are caftans, embroidered ethnic tops and blouses, floor-length, layered, and flowing toppers. They are often worn over leggings or flowing pants.

Her jewelry is very showy. Instead of refined regular, metal chains and pearls, you will see boldly mixed beads, stones, and leather. If there is any metal in her jewelry, it appears in a natural, odd-shaped signature piece. And bracelets, lots of groupings of ethnic bracelets.

Then there are the textiles. Frankie would not likely be caught dead in any synthetic fibers. Cotton and linen, and occasionally rayon (which is made from wood fibers) are the fundamental fabrics of her wardrobe. They move with her and are unencumbering.

Another element of this style is pattern mixing and the wearing of multiple colors together. In a throwback to her hippie style, you’ll see Frankie in tie-dyed clothing. But you’ll also see her in stripes, graduated ombre patterns, and again, ethnic prints.

Each outfit will incorporate multiple colors and often, more saturated ones, unless she’s opting for some of those sand-and-sea blue and tans that she wears well.

And even her hair says it all: a dramatic white stripe over long flowing hair. She is never going to have a prim, teased, and curled bob.

This is why entertainment is a great escape for us. We can still dream and imagine. We can try to imagine ourselves in another’s shoes.

And as far as the stay-in-place is concerned, there will always be an end and a new beginning. How we come out on the other side of this will say a lot about who we were all along.

So – are you a Frankie, or a Grace? Or does your style combine a little bit of both? What are – or were – your favorite pieces of clothing or jewelry in this style? Please share with our community!

Tags Coronavirus Fashion for Women Over 60 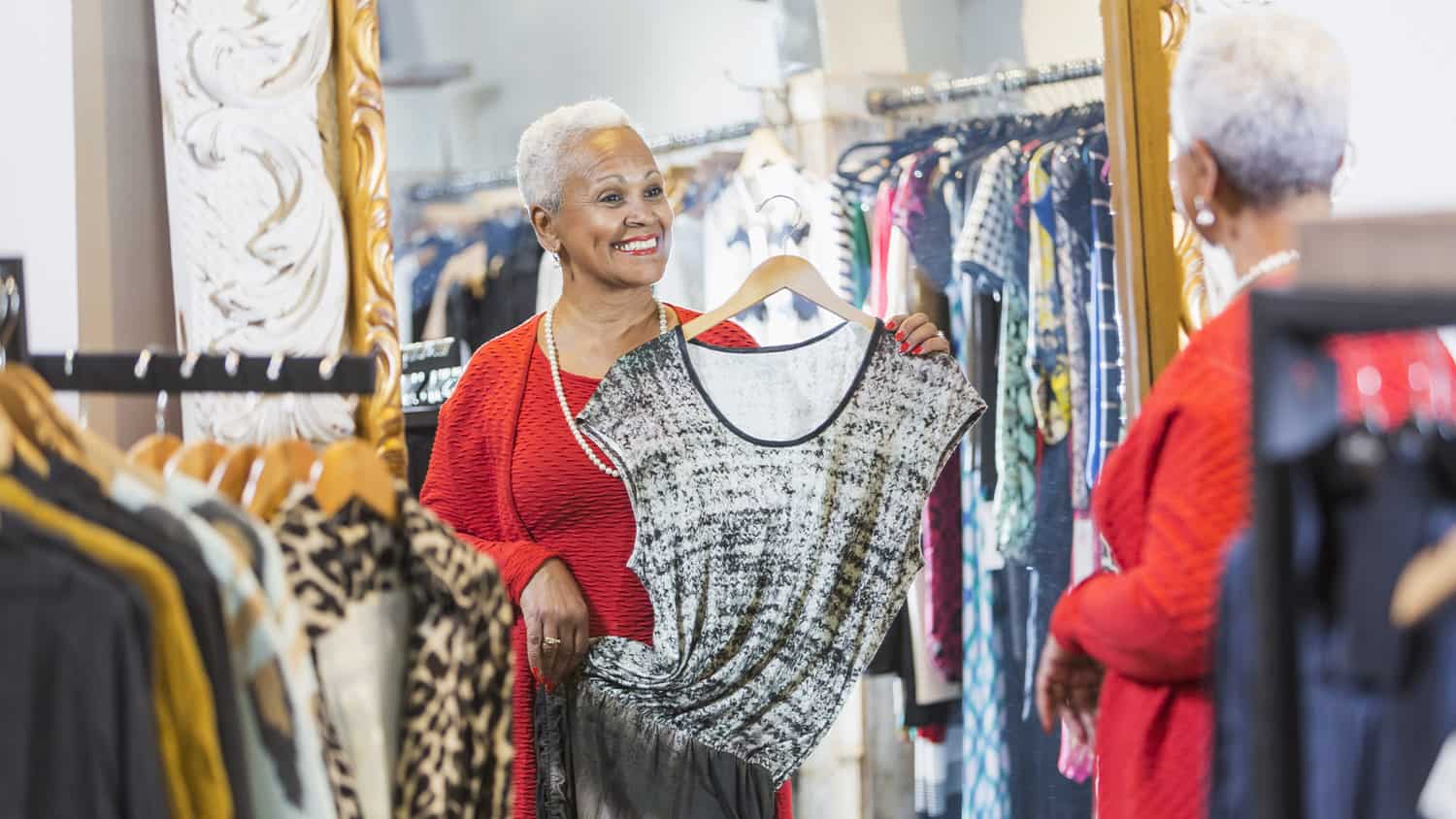 1 year ago
Makeup and Fashion

What Are the Best Dresses for Older Women of Every Size and Shape? 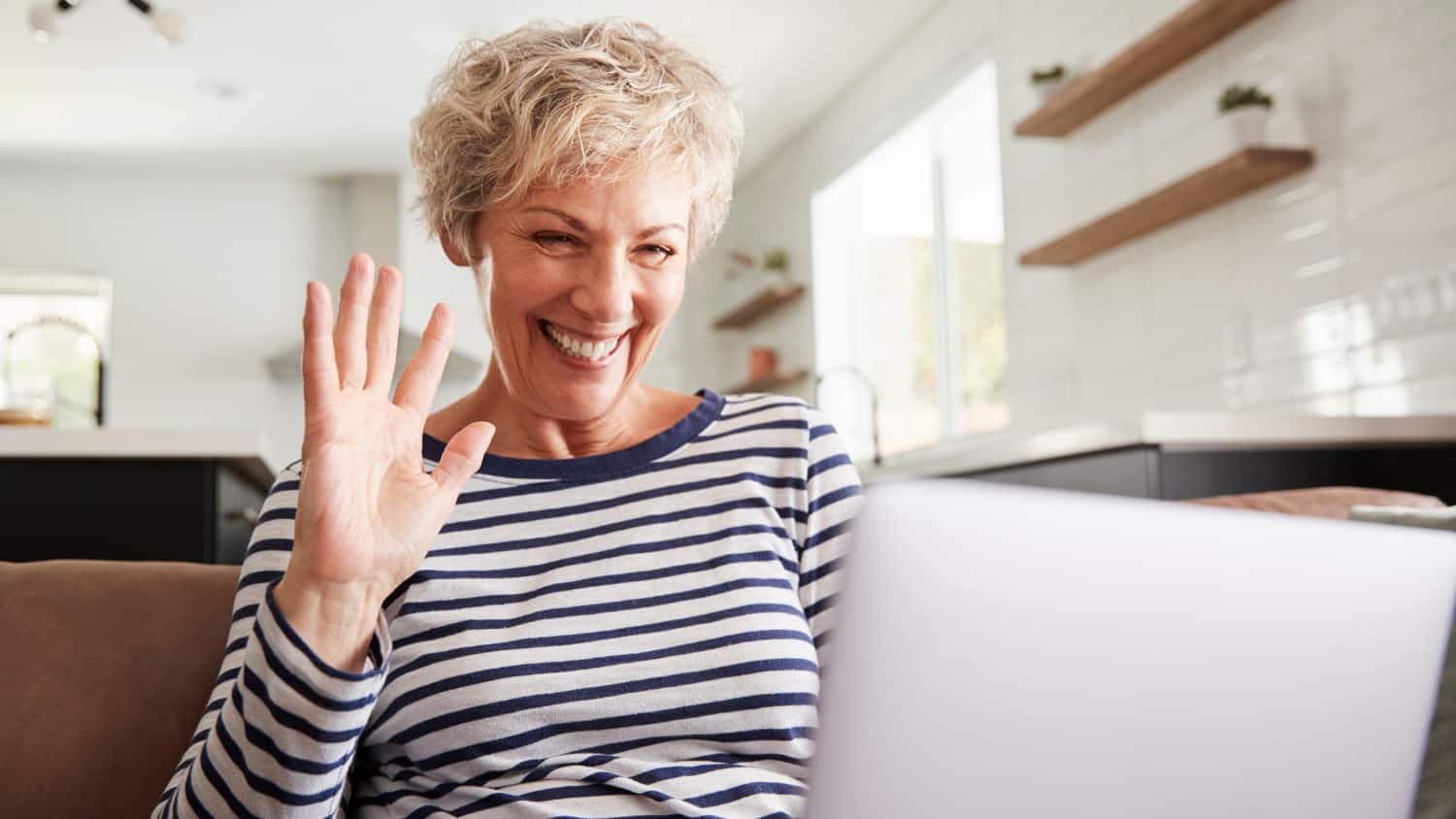 Is Covid Changing Your Relationships?