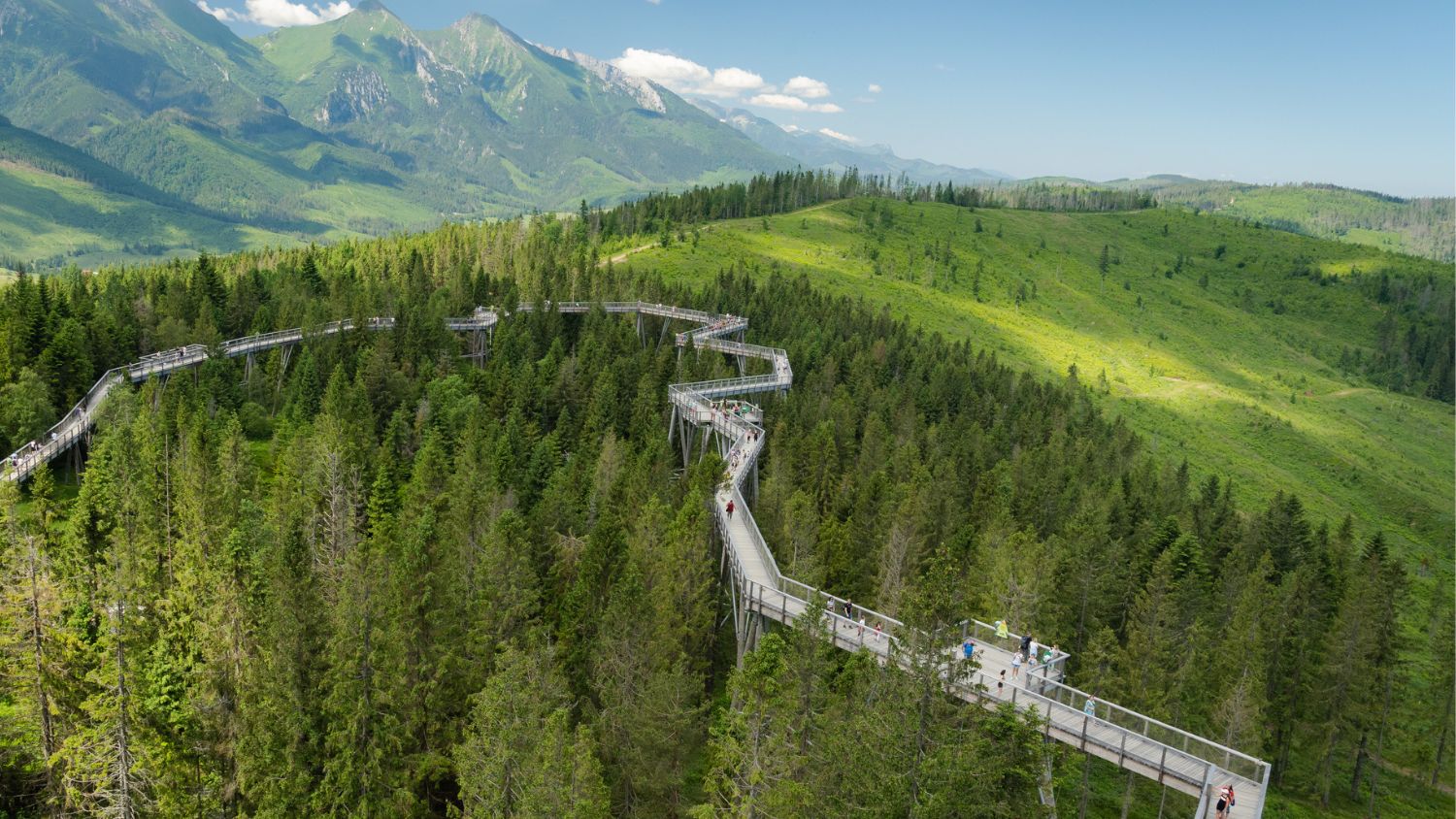 Several years ago, I wrote an article on Sixty and Me on the benefits of Shinrin-Yoku, spending time in the forest for health and well-being.

I thought of my forest experiences, then and now, when I heard about a recently developed forest project near where I was staying for a few weeks. The Sentier des cimes Laurentides, or The Treetop Walk.

From the parking lot, I looked in the distance at the wood structure that rose above the trees. Looking above the trees, I wasn’t sure how comfortable I would feel going to that height. It turned out to be far more comfortable than I expected.

From the ticket platform, I had a choice of taking an elevator or walking up steps to begin my trek up the wooden walkway. I could see that the project was devised to be barrier free and accessible to anyone with a disability. To the side of the ticket area, there were wheelchairs for use by visitors.

The slope of the aerial walkway was gentle, and the route made a number of turns as I slowly moved through the trees. I became aware that I was taking deeper breaths, enjoying the fresh air in the breeze surrounding me.

I reached the base of the tower which is 40 meters at its highest. That was the tree-top level for many of the trees, with a few that were still reaching their branches above me.

It was early September when I visited the wooden walk. There were a few trees ready to let go of the deep green of summer. By now this view will treat visitors to shades of yellow, red and magenta. Alas, I am not there to see it. Perhaps another year.

Going up, the rustle of the leaves became louder, and I could feel a difference in the wind, with strong swirls softly buffeting. I thought to carry a light jacket on that warm afternoon, expecting it might be cooler as I walked up. I was right.

About half-way up the tower, I decided it was time to make the return walk. I knew the view was even more expansive at the top of the tower, but seeing it hadn’t been my primary goal. I stopped where I was and savored the sense of standing atop the trees and enjoying being among them.

As I slowly descended the walkway, I mused that this feeling of being with trees away from the earth may be one of the reasons children (and some adults) love treehouses. I could hear more bird calls.

A bit further down, I could faintly hear distant traffic. It was then I realized the absence of external noises above the trees; only the sound of the wind and leaves rustling.

I made my way down to the base of the treetop walkway to the P’tit Train du Nord Trail, a multi-use path that runs through the Laurentians. This heritage site was many years ago a fish farm with ponds and channeled streams.

If you’re interested in taking a walk among the treetops, you may need to travel a bit. This aerial walkway is the only one in North America created by EAK, a German company. EAK does have over 10 similar sites across Europe, including Alsace, France, Slovenia and locations in the Black Forest and the Bavaria Forest. There may be other companies creating similar structures, but I’m not aware of them.

This wonderful gem is located near the historic town of Saint Faustin, about 150 kilometers north of Montreal.

Have you mingled among the trees this summer, either at ground level or at treetop? Do you find yourself breathing more deeply in or above a forest?

I’ve been participating in a delightful Forest Bathing group with Emma Rooney, Certified Forest Therapist, every Wednesday online, yes online, since the beginning of COVID. It has saved my sanity, and brought wonder and community into my life…and it’s free. I’m so lucky to have discovered it. If you would like to learn more, you can find Emma at bloomingcaravan.ca.

Wendy, this is a beautiful website. How thoughtful to establish a means for anyone who can’t otherwise participate in the physical forest to experience her program.

Wow this sounds amazing! I love to hike; my favorite hikes are in the Olympic National Forest. I do find myself breathing more deeply in the forest- taking in the wonderful scents. I’d love to try this treetop walk some day! Thanks

I love forests as well. They give me a sense of calm. When I travel west again, I will take your suggestion and perhaps do some hiking there.

Thank you for sharing! I’m fortunate to be able to step out my front door, cross the drive, and be in the always welcoming woods. As I follow my trails, the presence of the trees and all their domain contains has often brought me comfort, joy, and peace. Whatever I’m seeking, they provide an atmosphere in which to find it, and I am grateful.

Sharon, I love your last sentence. ‘ whatever I’m seeking………….’ Isn’t it wonderful that you have access to that world just a few steps away.

And yes to the childhood feeling of a treehouse- My favorite houses–the last two I’ve lived in–overlook & look into trees (PNW); treehouses are the best, plus all that fresh, oxygenated air…

I’m so glad you mentioned the fresh air – it is so important and more and more I can sense when it’s a ‘poor air quality day’ long before I hear about it or see it on my weather report.

Yarns, Accessories and Knitting Patterns for Beginners – No More Excuses! 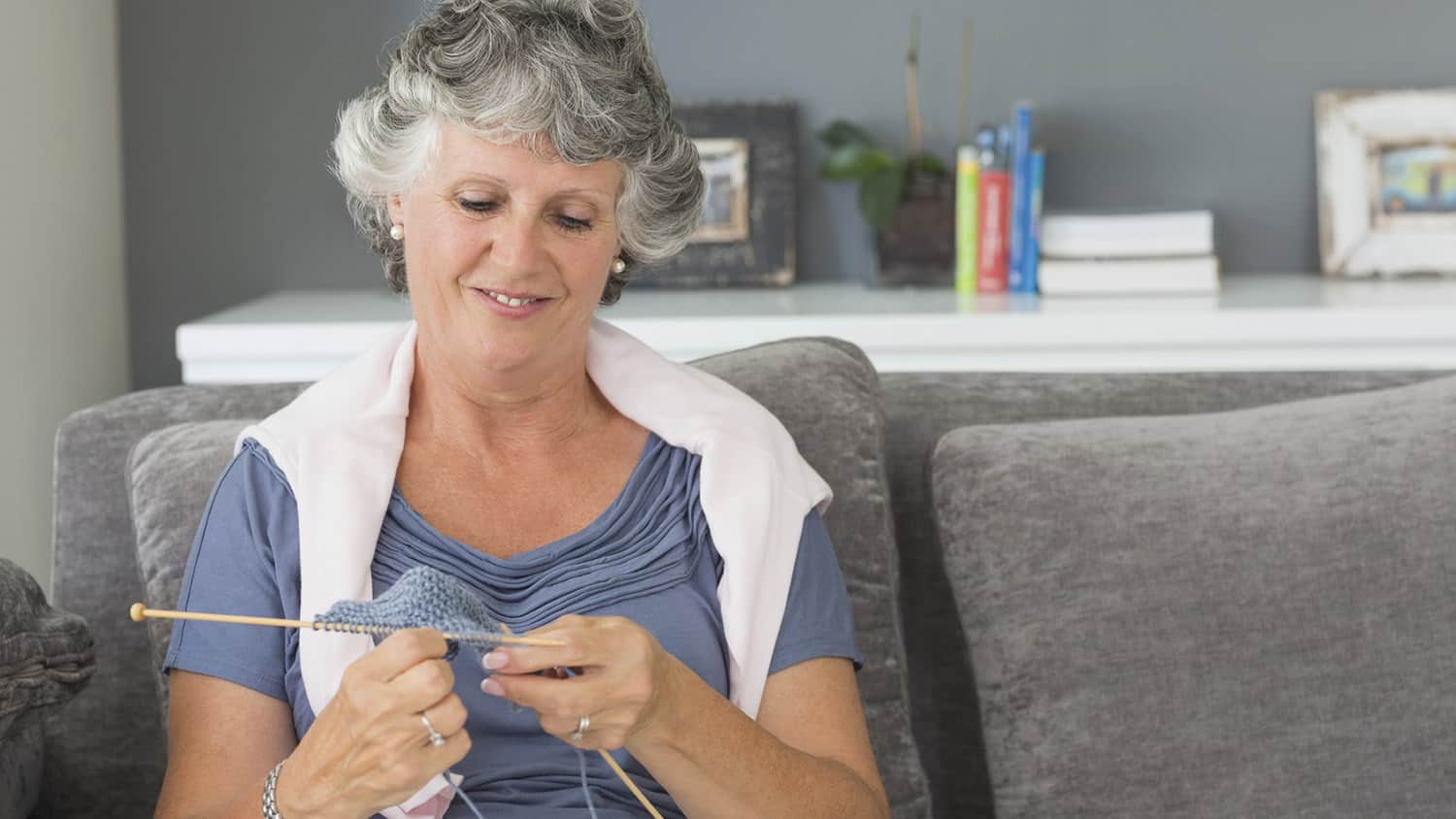 Knitting Tips for Beginners from the Fabulous Nancy Queen