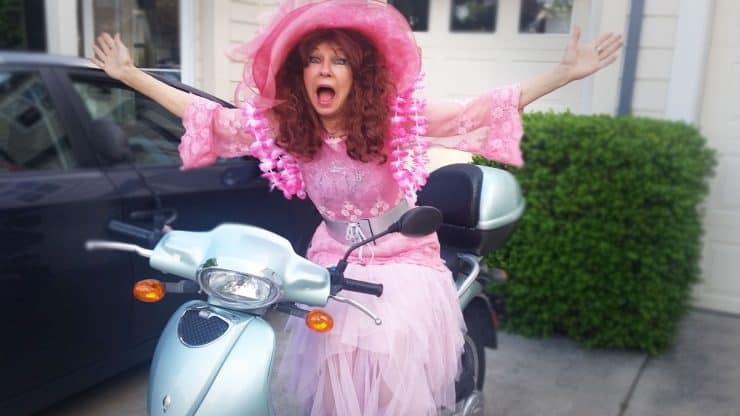 What is a Gladlift and How Can It Make You Feel 30 Years Younger?

He lives in Los Angeles. I live in Ashland, Oregon. We are both busy. When we do get to be together, the time flies. At Christmas he comes home to visit. It is always fun. Then comes the big letdown. He leaves. For years I could plan on the defining moment when the change occurred… saying goodbye at the airport.

What Was I Doing to Myself?

Three years ago I decided enough is enough. I felt done with capping off a great time with sadness. What was I doing to myself? It felt like ending a good meal with a really rotten tomato. Ewww!

Adjusting to the empty house left me with an empty kind of feeling. All the good times and memories faded away as though the sadness was a huge mouth that swallowed them up. Surely, there was another way to make that adjustment without losing what had been gained.

I recalled memories of other transformative actions in my life that I recorded in my self-help memoir, The Grandma Boom Chronicles… More Alive at 65! and was determined to find a winning formula once again.

Driving my son to the airport that morning, three years ago, I announced that we needed to transform sad to glad. I insisted we could do something really fun at the airport. His response… “Mom, it is 8:30 in the morning!”

“Darion, I have to change the sad to glad. We’ll do something you can post on Facebook and it will be fun for others, too.”

I could hear him taking a deep breath as he realized there was no escaping.

His Eyes Were Not Filled With Total Trust

After he got checked in with his luggage, I told him what we were going to do. I explaining that we had to find a stranger to take a picture. His eyes were not filled with total trust. But I continued with a very uplifting attitude. “This is really going to be fun!” He glared. I continued. “I am going to get on the ground and act like I am trying to keep you from leaving by holding onto your leg.”

He still was not convinced but, I went forward with the plan. I asked a friendly looking passerby to take the picture with my son’s cell phone.

“ACTION!” I plopped down on the airport floor, stretched out and grabbed his leg. By now he was getting the jest of it. He posed with a convincing look on his face. Passersby in the airport were laughing and smiling. Some were puzzled as if they thought this was actually happening! 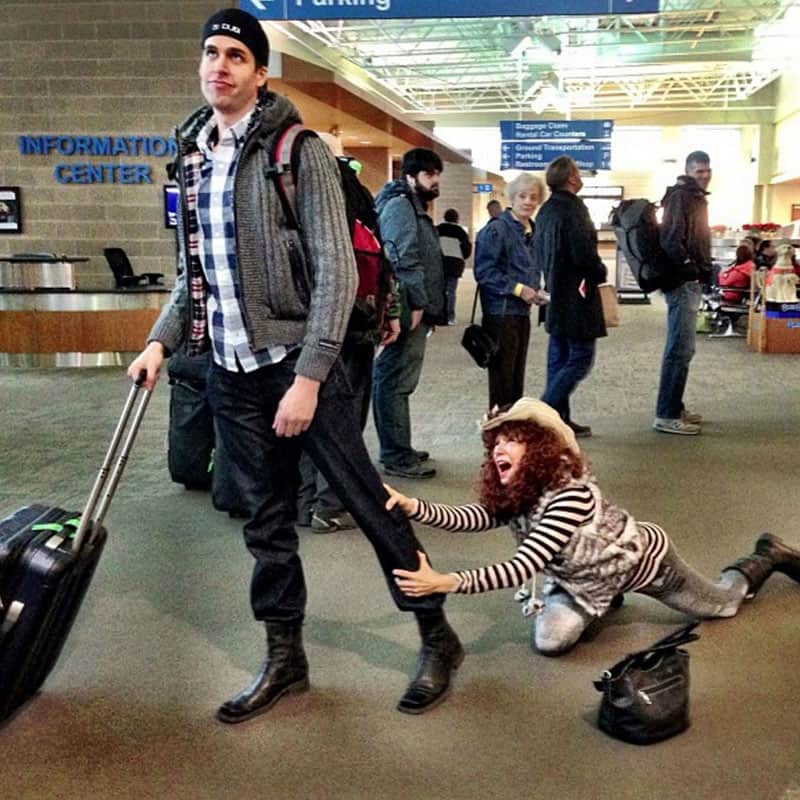 Several pictures were taken with that pose. As Darion looked at them, he became very amused and even laughed… at 8:30 in the morning! Ha-ha! Later that day he posted it on Facebook with the caption: “I had the sinking suspicion that Mom didn’t want me to fly home.” It got around 200 Facebook “likes.” That broke a record for his posts. Sad transformed successfully into glad with many reaping benefits from the fun.

A new tradition was born. Each year at Christmas a new ploy is created.

This year he surprised the heck out of me. I usually have all the ideas for sad/glad transformation. But he beat me to the punch. He suggested we make a huge magnet with cardboard and aluminum foil to make it look like I was magnetically pulling on him to stay. It proved to be another great pose! 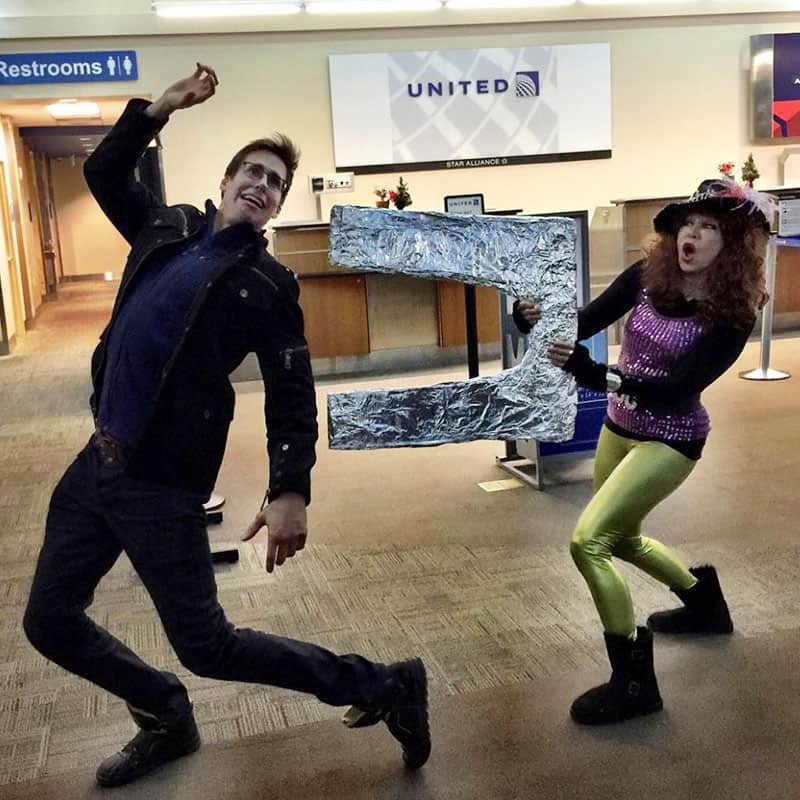 I Began Seeing Other Circumstances That Could Use a Gladlift

A big lesson was learned that first year of transformation. I began seeing other circumstances that could benefit from a gladlift. I took on a self-imposed challenge to see how many things I could more quickly transform into something positive. It became clear that accepting the sadness was the first step before finding another angle from which to see the totality and experience an upliftment in the circumstance.

Feeling the sadness trigger point in my body was the first step to accepting the emotion. Then I could breathe through it, glean insights, release it and progress to being able to move to another emotion.

I like using my emotions instead of allowing them to use me. It is one of my ploys to keep my aging process feeling awesome.

Putting the proof in the pudding… I was told for the fourth year in a row in 2015 that I had to move from my rental due to the owner deciding to sell. It was like a giant’s thumb pushing down on my 66-year-old head to drill me into the ground. I remembered the airport gladlift just moments after the big announcement.

The heaviness of feeling disappointed was not fun. I immediately switched my mindset to one of adventure about where I would live next. Now, mind you, it did not mean packing up and moving four years in a row was a delicious delight. But it was much better for me to keep nourishing the attitude for a gladlift that was within my reach and empowerment, making moving a tad bit easier on my psyche.

Once I learned from a lecture with a Tibetan Lama how to do a ritual for emotional transformation. It is called the Chod Ritual. When something difficult happens, it is advised to find a way to laugh about it through any means or antics.

What happens is that the difficulty which rests on one end of the emotional spectrum catapults to the opposite end with a way to make the heavy feeling become light. The next phase tends to occur on its own. Intentionally going from one extreme emotion to the other can assist a person to find a center place on the spectrum of emotions… a neutrality.

This does not mean the difficulty goes away or that one does not visit that feeling, but it moves the emotional blockage in such a way that it is easier to sustain some kind of grounded centering. I believe the airport antics were tapping into the dynamics of the Chod Ritual. It worked!

One day this spring I needed a switcharoo for my psychodynamics. Circumstances were not so great for a couple of days in a row and I grew weary of dealing with them. Weariness incites an old, worn out feeling. A gladlift was what my inner voice doctor ordered.

I decided to do dress-ups and act like a glamour girl sitting on the neighbor’s motorcycle just for the heck of it. That made me and the neighbor laugh. The fun ripple helped get me back to a good center. Plus pink always brings a perky feeling to my heart. Feeling younger was an automatic drug free upper. Gladlifts youthen me.

TEN TIPS TO FEEL 30 AFTER 60 is a free download with some fantastic youthening keys.

When you have sadness or other emotions that are not pleasant, what do you do with your thoughts, feelings and actions? Do you have the desire to transform unpleasant emotions once you accept them? Do you have a formula that works for you when you have a challenge in your life that can be seen and experienced from another angle in order to see more objectively and grow through and beyond the challenge?

Janai Mestrovich aka "Grandma Boom" is a 40-year pioneer of kids’ television programming. She is an international speaker and the author of 7 books, including a self-help memoir, endorsed by Doris Day. Janai is a retired instructor with the University of Oregon who now helps older adults to find their creativity and engage with their passions. She is a proudly outrageous grandmother. You can read more about her work at Grandma Boom http://grandmaboom.com 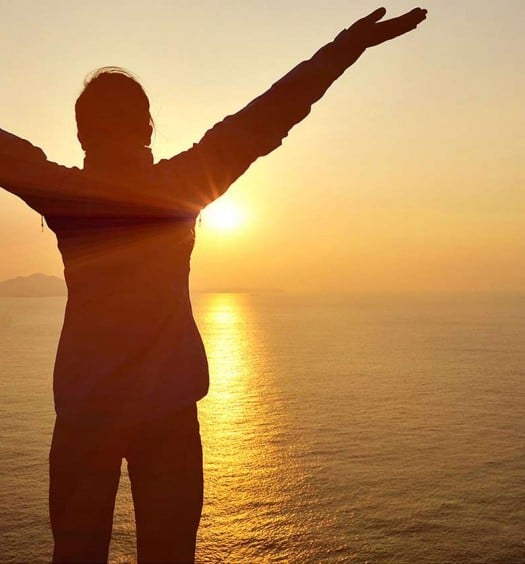 When it Comes to Finding Happiness, Small Steps Make a Big Difference 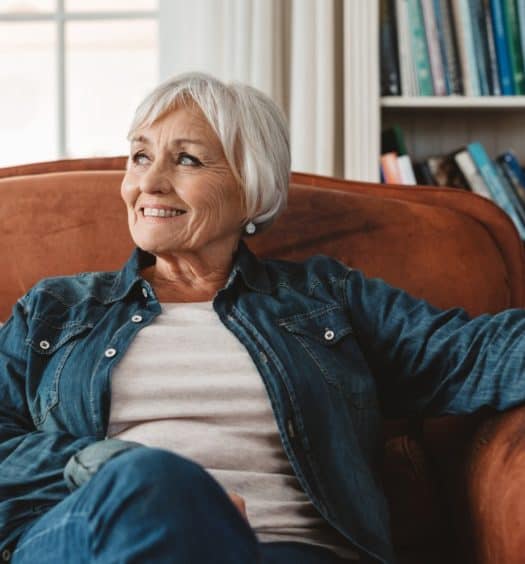 Learning the Skill of Optimism in the Age Of COVID-19